2004: The Year the Tide Turned - HumaneWatch 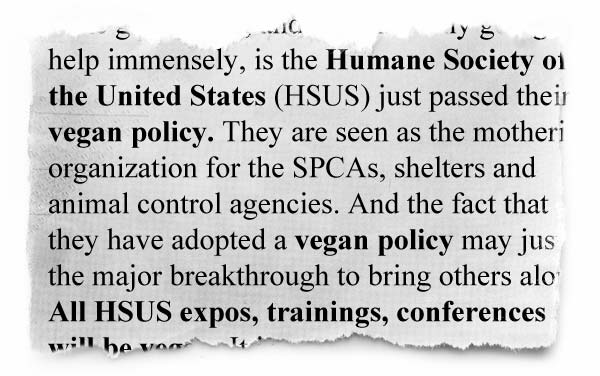 To see the difference, compare what HSUS’s annual reports have chosen to emphasize in recent years. In 2000, the big news included an expansion of HSUS’s "Pets for Life" animal-adoption campaign, the "Kindred Spirits" memorial program for people who have lost their pets, and a section titled, "We Don't Run Shelters, We Help Shelters Run Better." This kind of literature is what you might expect from a group with “Humane Society” in its name.

Now look at 2009 (the most recent annual report available), when the focus had little to do with pets at all. It’s all about regulating animal treatment, banning the commercial sale of animal products, “investigating” cattle ranches in a quasi-legal undercover fashion, and running programs to keep hunters away from wildlife.

So what was the turning point? If you guessed Wayne Pacelle becoming CEO in 2004, you win a vegan cookie.

And Pacelle’s ascendancy is just what’s visible from the outside. For an internal perspective, see the November/December 2004 issue of Satya, a now-defunct magazine for environmentalism and animal-rights activism. Satya interviewed activist Kim Sturla, who runs a nonprofit group that advocates the abolition of livestock agriculture. Sturla discussed the changes inside HSUS just 9 months after Pacelle became CEO:

The good news, and what is really going to help immensely, is the Humane Society of the United States (HSUS) just passed their vegan policy. They are seen as the mothering organization for the SPCAs, shelters and animal control agencies. And the fact that they have adopted a vegan policy may just be the major breakthrough to bring others along. All HSUS expos, trainings, conferences will be vegan. It is huge.

Sturla’s contemporary account lends crucial context to the sea change that began when Pacelle came to the helm. It also reveals that the animal-rights community knows exactlywhat HSUS’s public image is (“they are seen as the mothering organization for the SPCAs, shelters and animal-control agencies”) and how its influence can be used to further a vegan agenda.

This is just an early indicator of what HSUS had already started to become, and it’s not your granny’s pet-protection group.Because animal welfare charities shouldn’t see it as their place to advocate vegetarianism or veganism. Not even for dogs, unlike the view of – you probably guessed it — HSUS.