The Visual HSUS (First in a Series) - HumaneWatch

Regular readers of our successful HumaneWatch website understand that the wealthy Humane Society of the United States (HSUS) has set itself up for plenty of ridicule, mostly through its own outrageous missteps and public gaffes. And this week we’re beginning to put some of those self-inflicted wounds on display—literally.

For instance, HSUS president Wayne Pacelle famously said last December that convicted dogfighting kingpin Michael Vick “would do a good job as a pet owner.” (He’s suddenly taken to claiming, straight-faced, that he was misquoted.) HSUS recently held an “Animal Care Expo,” despite the fact that providing hands-on animal care is not part of its mission. And the organization’s propensity for diverting pet lovers’ donations to lobbyists recently resulted in new Congressional demands for a federal investigation.

But it’s the numbers that mostly get Americans’ collective goats. HSUS donors tend to get whiplash from the double-takes they endure after learning that less than one percent of their contributions end up in hands-on pet shelters. The revelation that HSUS is sitting on more than $191 million in assets, similarly, doesn’t play well in the current economy. Neither does the news that the Philadelphia Eagles paid HSUS $50,000 before the animal rights group began its campaign to rehabilitate star quarterback’s Michael Vick’s image. 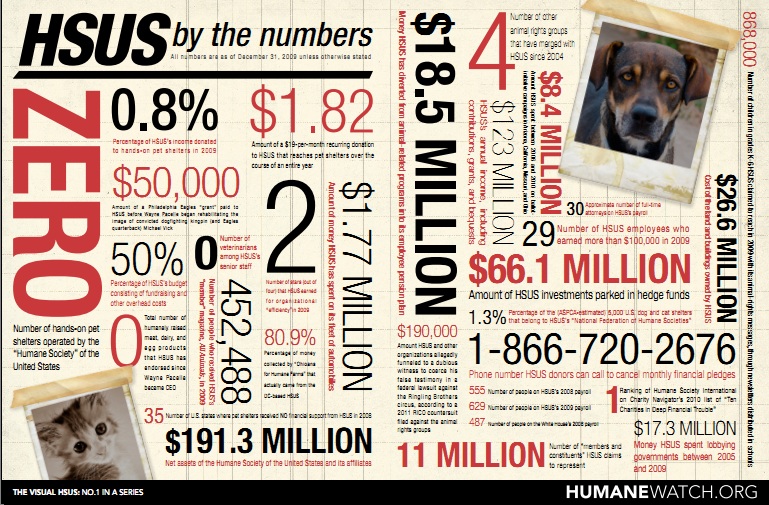 We’ve assembled all of those crucial numbers in one easy-to-read poster, and it’s the first in a new series we’re calling “The Visual HSUS.” (Click on the graphic for a PDF of the poster.) More “visual” installments will come every two weeks, so be sure to check back with HumaneWatch often—and share the new series with your Facebook friends!