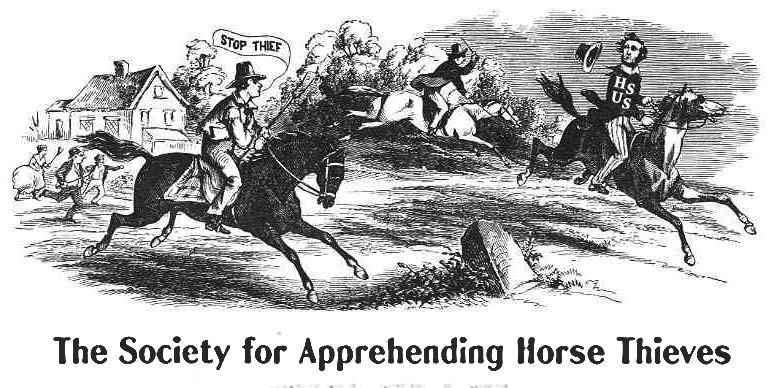 Last week we updated you on the case of Denisa Malott, an Arkansas horse owner and trail-ride operator whom HSUS raided last November. We found it particularly ironic that the “Humane Society” of the United States took 25 horses from Malott and left them without adequate food and water. And this was after an HSUS’s press release said the animals would be immediately taken to a proper care facility.

Meanwhile, Malott—who apparently ticked off the wrong animal rights activist and wound up facing 25 felony animal cruelty charges—got a court order allowing her to care for her own animals so they wouldn't starve.

Now Malott has raised the stakes by asking the FBI to investigate the Humane Society of the United States under the federal Animal Enterprise Terrorism Act (AETA). Unlike HSUS, we don’t have the benefit of a medium-sized law firm on our payroll. But to our eyes, it looks like her September 28 letter lays out a reasonable case.

If you’re not familiar with the “AETA,” the U.S. Congress passed the law in 2006 in response to increasing criminal behavior by the violent wing of the  animal rights movement against businesses that depend on animal products for their survival.

Basically, the AETA says that intentionally tormenting or threatening the employees of a business, specifically because they work in an “animal enterprise” (whether it’s a zoo, a cancer research lab, the circus, a dairy farm, or—well, you get the picture), is a special category of crime. If your threats or acts of violence aimed at one of these businesses causes it to lose money, and you specifically meant to strike a blow for animal liberation, you’re on the hook for some serious jail time.

It’s helpful to think of the AETA as a “hate crimes” law with a different focus—protecting people in a particular range of occupations rather than those of a specific skin color, sex, or sexual orientation. And yes, behavior that’s protected by the First Amendment—including peaceful protest activity, no matter how obnoxious—is expressly exempt from prosecution under the AETA:

(e) Rules of Construction- Nothing in this section shall be construed–

(1) to prohibit any expressive conduct (including peaceful picketing or other peaceful demonstration) protected from legal prohibition by the First Amendment to the Constitution;

(2) to create new remedies for interference with activities protected by the free speech or free exercise clauses of the First Amendment to the Constitution, regardless of the point of view expressed, or to limit any existing legal remedies for such interference; or

(3) to provide exclusive criminal penalties or civil remedies with respect to the conduct prohibited by this action, or to preempt State or local laws that may provide such penalties or remedies.'.

In her letter to the FBI, Denisa Malott notes that all 25 felony counts of animal cruelty against her were dropped in August. This seems to indicate that the search of her property and the seizure of her horses probably weren’t triggered by legitimate concerns that her animals were being mistreated. Malott writes that her “requests for a copy of the probable cause affidavit were never honored.” That sounds to us like the application for a search warrant was incomplete. And perhaps the warrant itself was invalid.

But is HSUS really on the hook for conspiring to commit Animal Enterprise Terrorism? Maybe.

Denisa Malott’s business does fit the AETA’s definition of an “animal enterprise.”

(A) a commercial or academic enterprise that uses or sells animals or animal products for profit, food or fiber production, agriculture, education, research, or testing;

(B) a zoo, aquarium, animal shelter, pet store, breeder, furrier, circus, or rodeo, or other lawful competitive animal event; or

(C) any fair or similar event intended to advance agricultural arts and sciences;

Congress was also quite clear that in order to trigger the AETA, you must intentionally damage or cause “the loss of any real or personal property (including animals or records) used by an animal enterprise.” Malott's business incurred financial losses when HSUS took her horses, which were a significant source of her income. She also incurred losses when some of the horses were nearly starved to death in HSUS’s care.

There are other scenarios in which someone can be charged with violating the AETA. Intentionally making someone fear for his or her safety is a big no-no. And the law spells out how this might happen: repeated threats, vandalism, property damage, criminal trespass, harassment, intimidation, or a conspiracy to do any of these things.

Let's see if the shoe fits:

Only Malott knows, of course, how she felt when her animals and her livelihood were torn away from her. Harassed? Intimidated? She uses the word "terrorized" in her letter to the FBI:

In the truest sense of the word, I have been “terrorized” by the vigilante-like actions of the representatives of the Humane Society of the United States and the Humane Society of Missouri, and if truth be known, one or more of them may very well have improperly misled the Sheriff into becoming an unwitting accomplice in the violation of the AETA as well as my Civil Rights.

If charges should actually be brought against individuals working for HSUS, more information about the events of last November 12 will certainly emerge. As a nonprofit corporation, HSUS could be charged criminally. And a criminal case could easily become the prelude to a monster of a lawsuit for defamation, Civil Rights violations, or who-knows-what-else.

There's an odd irony in thinking that the animal-rights Mother Ship could be in serious hot water for moving a few truckloads of horses a few miles down the road. We’ll all just have to wait and see.

If you are inclined to help Denisa Malott with her legal expenses, the Arkansas Horse Council is promoting a Legal Defense Fund for her benefit. Visit the AHC's website to learn more.