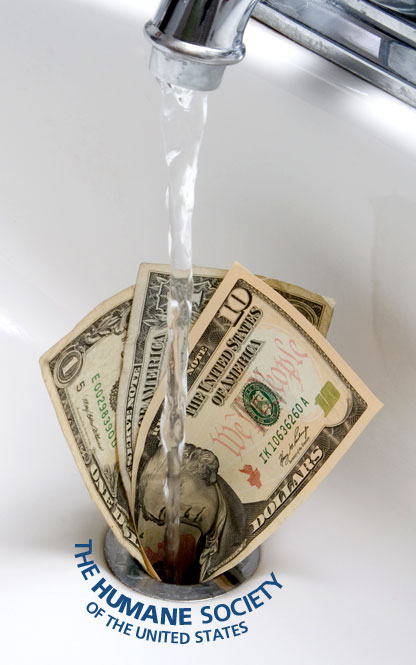 Courthouse News Service reported in December that the Humane Society of the United States sued a Vermont capital management firm over charges that it fraudulently backdated a $5 million HSUS investment.

The result, HSUS alleges, was that Manchester Capital Management put its investment on the books during a “down” market period, costing HSUS $240,000 in losses it shouldn’t have incurred:

The Humane Society claims it delivered $10 million to Manchester on Oct. 1, 2008, to invest in the Equinox Alternative Offshore Fund, Manchester's "investment vehicle." The Humane Society says it forked over another $5 million a month later, but Manchester backdated that investment, making it "at risk" for October.

Manchester knew its October investments were operating at a loss when did that, Humane Society says.

We have HSUS’s lawsuit in the HumaneWatch Document Library. It alleges:

Due to the October 2008 market performance of Equinox's investments, Manchester's backdating of the Humane Society of the United State's $5 million investment immediately reduced its initial value by approximately $240,000, a loss of about 4.8% in the principal, which in turn caused the loss of future gains attributable to the initial $240,000 loss.

Whoever prevails in this lawsuit, it appears HSUS had $15 million in cash lying around, just collecting dust, in the last quarter of 2008. That raises a few questions.

First, whatever happened to the HSUS Bylaws? We’ve explored how HSUS’s own rules require that:

There’s no legal requirement that HSUS go out of its way to invest its contributors’ money offshore. Are we supposed to believe that HSUS has $15 million in donations that were specifically restricted for capital investments? (If this sounds reasonable to you, let us know.) We can imagine a donor earmarking funds for specific programs, but not for offshore investments.

The bottom line? It looks to us like HSUS is hoarding money when its donors intended for it to be used immediately—largely to “save” the animals in HSUS’s television ads.

Second, whatever happened to “Humane Capital LLC”? This is a company set up by Chris Kerr, HSUS’s former “director of private equities.” The firm still seems to be operating, but we’re left to wonder if HSUS decided a plan of “actively manag[ing] equity investments in animal-friendly, for-profit companies” was going to be a net financial loser. (Kerr, however, is on the Board of HSUS’s Political Action Committee.)

One more thing: The timeline laid out in the lawsuit suggests that HSUS’s initial $10 million investment was already showing a 4.8% loss when the group made its second investment of $5 million, literally “throwing good money after bad.”

HSUS is only suing over the poor performance of the last $5 million. But after the first $10 million came up $480,000 short, what reason did HSUS have for investing another dime?

Remember: This is not Wayne Pacelle’s money. It’s not even really HSUS’s money.

The group’s donors make contributions “for the animals.” So it’s the animals’ money. Not that they typically see much of it.

Here’s a thought: If HSUS ever makes good on its pie-in-the-sky wish for animals to have “legal standing” in courts of law, maybe the first canine lawsuit will be filed against HSUS for misappropriation of funds.