A Library Begins With a Single Book - HumaneWatch 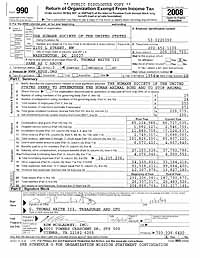 And a twenty-first century document collection begins with a single PDF.

Here’s the federal income tax return from the Humane Society of the United States for the year 2008.

Even though 2009 is over, HSUS has until the end of May to file its taxes for last year, and it's customary to request an "automatic" 3-month extension. So this is the most recent return available.

HSUS itself has published a version of this document on its website. We trust it’s an official copy.

Here’s the odd part. That $4.7 million in grants in (2) above? Only about $450,000 of it consists of checks that HSUS wrote to organizations doing hands-on sheltering of dogs and cats. We checked, line by line. We're going to post our accounting of this soon, so anyone can correct our math or quibble with our estimation of what counts as a hands-on pet shelter.

Over at CCF, we detailed some of this at the end of December. HSUS also paid “Arizona Lockbox and Fulfillment, Inc.” over $4.2 million in 2008. That’s more than 4 cents of every dollar it spent. What does this company do? It counts HSUS’s donations.

And we're sure it’s a fine, fine company. But don’t you think it’s a little creepy that its initials are A-L-F?

In addition to this document, we're supplementing The HumaneWatch library with HSUS tax returns going back to 1995. Do your filing cabinets contain any earlier HSUS tax documents than these? You know where to send them.