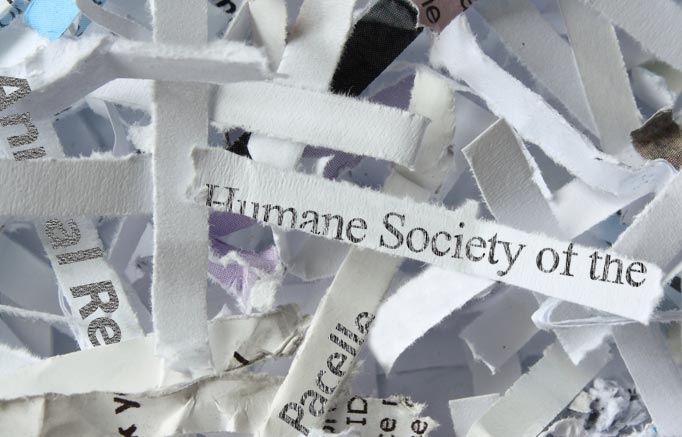 Shortly after HumaneWatch published the Humane Society of the United States's 2009 tax return last month, HSUS itself posted a copy on its website (along with a side of buffoonish puffery). But at the same time, something else went missing from the "official" Internet page for HSUS financial records: seven years' worth of other tax returns and Annual Reports.

That's right: At the same time Wayne Pacelle was patting himself on the back for publicly releasing a tax return that we had already published, his webmasters were scrubbing HSUS's website of nearly a decade of public records—virtually shredding its own history before our very eyes.

Lucky for us we have our own copies.

So beginning today you'll be able to find all of the Humane Society of the United States's annual reports going back to the year 2000 in the HumaneWatch document library—along with all of those pesky tax returns that Wayne's people deleted.

Reading back through these archives, it's fascinating to see how much things changed at HSUS after Wayne Pacelle became CEO (2003-2004). Gradually but unmistakably, the emphasis shifted away from pets and toward … well, everything else. Considering how much Pacelle's HSUS has advertised itself as a dog-and-cat group, it's striking to read just how much of the group's agenda was focused on cows, pigs, chickens, circus elephants, and lobbying.

It's also interesting to see how different the tax returns and annual reports are, often mis-matching millions of dollars in a given fiscal year. Of course, tax returns are signed under penalty of perjury. Annual reports (for nonprofits with no shareholders or fiduciary duties) are just PR documents.

HSUS is still hosting its 2007, 2008, and 2009 Annual Reports and tax returns on its website, but who knows how long that will last? Here are links to all the documents that HSUS zapped last month: