We’ve remarked in amazement this year on how so many Americans have gotten the wrong idea about what the Humane Society of the United States (HSUS) is—and what it isn’t. (Reader’s Digest version: It’s a richer version of PETA, and it’s not connected with your local Humane Society.)

The folks at the popular “Daily Candy” website don’t seem to get it. (Or maybe they do, and they just don’t care about animals all that much.) Yesterday’s DailyCandy Deals e-mail included a sugar-coated little promo for HSUS, titled “Comfort of Creatures.”

Here’s how they set it up (emphasis in the original):

The Humane Society saves puppies (and kitties, birds, turtles, chinchillas, etc.), and if you can’t give one a home for the holidays (and forever after that), give some green to help the cause.

Did you catch that? “The” Humane Society? Like there’s only one. And it apparently “saves puppies.”

That’s a neat trick, since “The” Humane Society (of the United States) doesn’t run any pet shelters. You know—the kind with puppies (and kitties).

Play the tape forward—click on the Daily Candy link—and the syrup starts tasting even more like saccharine (emphasis added):

The Humane Society is more than just an adoption agency and shelter. It works to protect animals by pushing for better laws, investigating animal crueltyï»¿, encouraging pet-friendly policies, and conducting disaster relief and animal rescue. We’re big fans and think you should be, too. 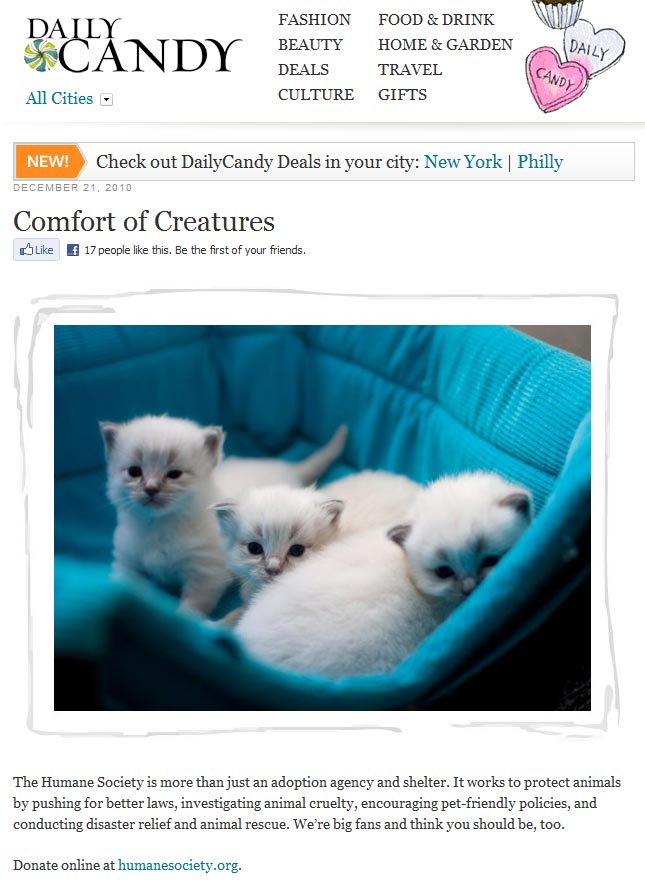 Really, now? This is about as meaningful as saying your kitchen blender is “more than just a bowling alley on wheels.” Sure, it can chop, blend, and frappé, but if you're facing a seven-ten split, it's not much use.

Notice the cute kittens in the Daily Candy article? Those are the kittens that wind up dead because the shelter they're living in is dirt poor and has to euthanize more cats than it adopts out. It's under-funded because HSUS sucks gazillions of dollars out of its community and shares hardly any of it with the shelter that the donors thought they were funding.

Let’s set the record straight, yet again, since HSUS’s factory-fundraising operation has no interest in doing so. The Humane Society of the United States is nothing like “an adoption agency and shelter.”

There are thousands of hands-on pet shelters in America; somewhere between one-third and one-half of them have the words “Humane Society” in their names. If you’re into bankrolling Fido’s lobbyists and HSUS’s many defense lawyers, more power to you (and to them). But let’s not pretend HSUS regularly shelters pets or adopts them out.

That’s actual grunt work. The hard kind that HSUS CEO Wayne Pacelle has never done, and probably never will. It’s thankless work that can’t be supervised from a sprawling fundraising complex in Maryland. You get the picture.

The Daily Candy should embark on a tour of America’s real Humane Societies—and then reconsider the wisdom of telling Americans that there’s only one worthwhile way to support animals during the holiday season.