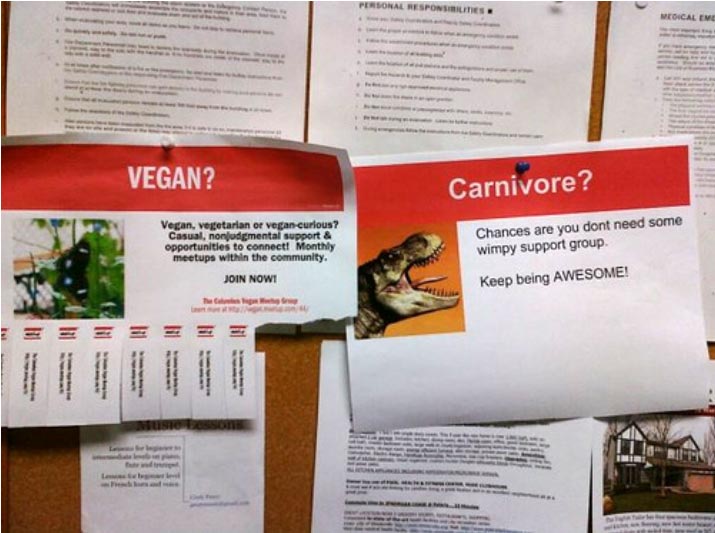 Following HSUS’s farm animal push in Ohio and California, it’s worth examining what the group believes about eating—especially since campaign director Paul Shapiro recently claimed HSUS “does not have an ‘anti-meat’ agenda.”

If you don’t read Animal People, the animal rights movement’s unofficial newspaper, you might want to. It provides a lot of “inside baseball” about movers and shakers in the movement—such as this note that Wayne Pacelle “hypothetically proposed a three-way merger of HSUS, the Fund [For Animals], and PETA as long ago as 1988.”

Every year, Animal People publishes a Watchdog Report about various animal rights nonprofits like HSUS. And the 2009 edition includes this interesting little gem. Since 2005 (one year after Wayne Pacelle took over), HSUS has had this official food policy:

At HSUS internal events where food is served and to which staff and/or guests have been invited to participate, HSUS will purchase vegan fare and we will strive to have organic products…External events under the control of HSUS should also provide for the purchase of all non-animal products.  If this is not possible, events should be vegetarian—no meat (including fish and shellfish). For events sponsored by HSUS with other organizations, strong efforts should be made to serve all vegan or vegetarian food. Partnering organization are to be informed that vegan options should be available and that they are preferred. Any animal products served at co-sponsored events should be Certified Humane, in keeping with HSUS support for this program.

In other words, slipping in a little bacon into a BLT could be a firing offense in HSUS-land. No wonder the only food HSUS officially endorses is "Tofurky."

This wasn’t always the case. Former HSUS president John Hoyt told the California Farm Bureau back in 1990, “We are not a vegetarian organization, and as a matter of policy do not consider the utilization of animals for food to be either immoral, or inappropriate.” Hoyt himself was not a vegetarian.

But things changed when the vegan Pacelle took over. He brought in Paul Shapiro, Michael Greger, Miyun Park, Josh Balk, and other like-minded vegan activists. (Shapiro's self-admitted goal at HSUS is “promoting vegetarian eating.”) And HSUS vice president Andrew Rowan explained to Animal People in 2007, “HSUS no longer spends its (donated) funds on animal food products … When HSUS employees are eating on expense accounts, they are expected to order vegetarian items.”

So Pacelle and the other HSUS tigers haven’t changed their stripes. They’ve just gotten a little more PR-savvy. Does anyone really believe Shapiro when he says HSUS doesn’t have an anti-meat agenda?

And, for the record, so what if it does?

This is America. You're free to be a vegetarian, a libertarian, a Unitarian, whatever you wish. But if HSUS is secretly flacking for Big Tofu, the group should be honest about it—just so donors know what they're funding.