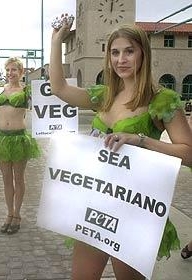 The big joke about the Humane Society of the United States’ supposed farm animal “welfare” campaign is that it’s run by a bunch of people who don’t believe in using animals for food and who come from radical animal rights groups. They basically think that the only humane form of animal farming is no animal farming. CEO Wayne Pacelle comes from the Fund For Animals; VP Paul Shapiro and outreach director Josh Balk come from the vegan Compassion Over Killing; and Food Policy Director Matt Prescott comes from PETA. They act like they’re friends of “family farmers,” but they aren’t.

Middleton is an “outreach manager” for HSUS’s farm animal (read: vegan) campaign and does some corporate outreach for HSUS’s Meatless Monday activism. From what we can glean, Middleton was with PETA as far back as 2000, jumped to In Defense of Animals for a few years, then re-joined PETA and worked there until she joined HSUS in 2010. She also volunteered to support “Vegan Outreach.”

So what were Middleton’s accomplishments at PETA? She was PETA’s “lettuce lady,” trekking about the country in a lettuce bikini for street theater. She also defended PETA for targeting under-aged school kids with anti-circus propaganda. Here’s The Washington Times in 2009:

PETA says it has sent about 10,000 of its activity books, replete with cuddly images of tigers and elephants, to schools and libraries all over the country. It also has launched a special Web site with "graphic" video footage of purported animal abuse at circuses, and a separate site for children called petakids.com, which has "a softer message for children 12 and under."

"This booklet takes an upbeat approach to telling kids the things they have a right to know about the circus," said Ms. Phelps. "Kids love animals, and if they knew that elephants and other animals are beaten in order to force them to perform what are for them confusing and physically challenging tricks, they'd have to be dragged kicking and screaming to the circus."

But Phyllis Ohr, a clinical child psychologist familiar with the PETA campaign, said, "I wonder if PETA is considering the impact of their approach on the mental health of children who are so young and not able to process information and images the same way that adults do."

And if that wasn’t enough, Middleton was also excusing PETA’s tactic of having half-nude ladies stand outside the circus.

Middleton also had a job defending lobsters. At one point, she even represented herself on behalf of the PETA website “LobsterLib.com”—that’s short for “Lobster Liberation.” She told the Bangor Daily News, “We will do anything to bring attention to the plight of the lobster.”

And if defending oppressed lobsters from hungry Mainers doesn’t strike you as a bit oddball, there’s her defense of cockroaches.

Yeah, you read that right. Apparently a theme park had a promotional event a few years back whereby people could eat cockroaches. Gross? Sure. Morally wrong? Maybe if you’re a PETA employee. Said Middleton:

What we want people to know is that cockroaches might be given a bad rap in society, but they do not deserve to be eaten and used as a gratuitous marketing gimmick.

Oh, those poor, poor, undeserving cockroaches. Why doesn’t Middleton adopt a few and give them forever homes? (On that note, we wonder what a dilemma it would be if PETA’s headquarters had an infestation.)

We could go on, but her farm-animal philosophy is summed in a letter she wrote a few years back: “It's never been easier than now to be a vegetarian. There's no excuse not to be.”

That sounds just like her HSUS colleague Matthew Prescott, himself the devisor of PETA’s odious “Holocaust on Your Plate” campaign comparing farming to killing Jews. Prescott has written, “There’s never an excuse to kill and eat an animal.”

HSUS’s farm animal “welfare” campaign is nothing but a PETA crusade in disguise. Any company or university that Middleton approaches acting like Mrs. Moderate should take note: She’s anything but.