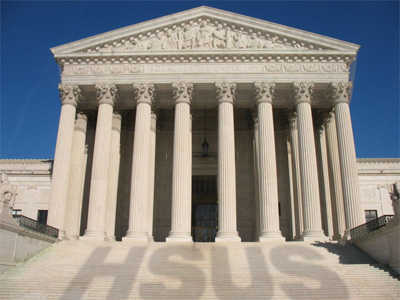 On Tuesday the U.S. Supreme Court struck down Section 48 of Chapter Three of the U.S. Criminal Code—a 1999 law that made the "depiction of animal cruelty" illegal. Not the actual animal cruelty (which was already against the law, of course.) The depiction of it.

Affirming an appeals court ruling in USA v. Stevens, the high court said that the law was too broadly written. Indeed, it appears to have actually criminalized TV reality shows about hunters, training videos for slaughterhouse workers, or movies about bullfights.

The Humane Society of the United States is not pleased to see this law struck down. Not one bit.

A little history is in order. Eleven years ago, this now-voided law was touted as a way to criminalize something called a "crush" video. (Apparently, some people derive sexual gratification from watching small animals get killed in a semi-erotic fashion. Yuck.) When President Bill Clinton signed the law, he specifically wrote that it should only be used for combating "wanton cruelty to animals designed to appeal to a prurient interest in sex."

Best of intentions. Road to hell. You get the picture.

And now there's a new law in the works, one that will supposedly be narrower and harder to misinterpret. (We'll see.)

This ought to be good. Actually, we have a legislative fix of our own to suggest.

The 1999 law explicitly prohibited "the knowing creation, sale, or possession of a depiction of a live animal being intentionally maimed, mutilated, tortured, wounded, or killed" if it was done for commercial gain, and if the depicted activity is illegal where the images were shown.

There's the rub. Bullfighting is illegal everywhere in America. So would it be a federal crime to sell a comic-book adaptation of Ernest Hemingway's novel The Sun Also Rises? Probably.

And hunting black bears is illegal everywhere in Florida. But it's perfectly legal in California (and in more than two dozen other states), provided that you have a permit. So if a hunting magazine published pictures of a California bear hunt and mailed the issue to its Florida subscribers, could someone go to federal prison? Yep.

The Stevens case concerned a dog trainer from Virginia who sold obedience videos for pit bull owners; they included some dog-fighting footage. Mr. Stevens was never accused of actually participating in dog-fighting (which is illegal). He just included the images as one part of a longer discussion about the history of the breed over the decades. (In fact, you can still buy his book on the same subject at Amazon.com.)

Many sportsmen were concerned that it was HSUS's intention all along to make it harder for Americans to communicate about hunting. (HSUS had a hand in drafting the 1999 law.) Remember Ted Kerasote's 1994 book Bloodties: Nature, Culture, and the Hunt? It's the source of some amazing insights about HSUS president Wayne Pacelle, and a book I've written about before. On page 265, Kerasote quotes a younger Pacelle looking at a rack of periodicals. "The definition of obscenity on the newsstands," says Pacelle, "should be extended to many hunting magazines."

The ink on the Stevens decision was barely dry when HSUS announced that there were already more than 50 co-sponsors attached to a new "depictions of animal cruelty" bill in Congress, one which the group hopes will be written narrowly enough to pass Constitutional muster.

The bottom line is that we need to protect animals from being tortured or killed in a manner that is criminal or morally reprehensible. No one should be allowed to profit from so-called crush videos or other images of animal cruelty. (emphasis added)

This is where we just might have something original to contribute to this discussion.

Doesn't the Humane Society of the United States profit from those "other images of animal cruelty" all the time? Isn't it HSUS's primary fundraising tactic to cash in on depictions of animals being intentionally mistreated in ways that are illegal? And isn't every one of the group's fundraising e-mails an example of interstate commerce?

(We use the word "intentionally" on purpose. Consider the recklessly spliced-together egg farm video that HSUS unveiled this month in Iowa. Either it was the product of intentional animal abuse on the part of farm workers, or the result of HSUS intentionally harming chickens to sensationalize its point.)

Why should HSUS be allowed to profit from its own collection of animal cruelty movies if no one else can? If we're going to go down this road yet again, a so-called "nonprofit" organization with a $100 million budget and $162 million in the bank shouldn't get special treatment.

If a movie of a furry animal being crushed under some pervert's high-heeled shoe is detrimental to society, then so is the sort of purposely lurid and scandalous footage that continues to make HSUS the richest animal rights group in history.

We haven't seen the new Congressional bill yet. (As we write this, it's not available to the public. We hope it will be soon.) [update: the bill's text was posted online on Friday morning] Since Wayne Pacelle had a hand in writing it, though, we have a feeling HSUS won't be impacted.

But this is why the Founding Fathers invented the legislative amendment process. Let's see if any enterprising Members of Congress decide to do the right thing and make everyone play by the same rules.