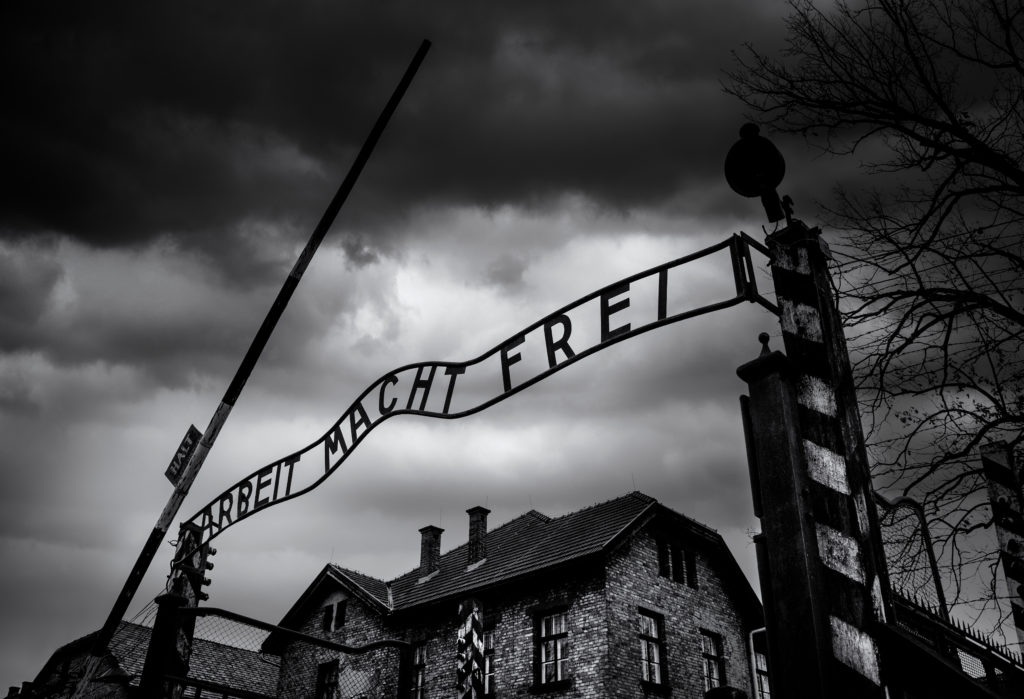 “Godwin’s Law” is an old adage that the longer an Internet discussion goes on, the probability of Hitler or Nazi Germany being referenced approaches 100%.

Dee Santucci is an animal rights activist based in Illinois, and currently the co-chair of the Puppy Mill Project’s education committee.

Santucci has spent years working to outlaw pet stores in Illinois. Despite continuous oversight of the commercial dog breeding industry by the U.S. Department of Agriculture and states, and research showing that abolishing the industry “without identifying an ethically preferable alternative” would be worse for dogs, Santucci remains opposed to the industry’s existence altogether, and argues “USDA licensed breeders are puppy mills.” Santucci even doubted there exists a single commercial breeder in the entire United States that meets “the basic needs of” the pets it breeds.

Keep in mind that along with USDA regulations almost every state has additional requirements for dog welfare. (Sadly, facts don’t matter to many.)

As part of her crusade against breeders, Santucci has relied on language trivializing the Holocaust and other tragedies. Santucci repeatedly compared pet breeders to the Nazis, arguing “the best puppy mill is a concentration camp.” 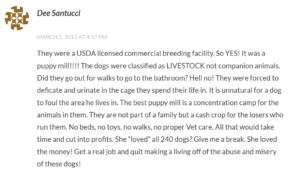 In August 2016, Santucci leapt to the defense of an outrageous WordPress article titled “If You Oppress Animals, Why Should Anyone Care if Someone is Oppressing You?” The extremist article stated “Jews, blacks, women, disabled, LGBTS, etc, have nothing on the oppression that animals endure,” and claimed those groups should first become vegan before “wishing to bitch about their own plight.” Not content to end there, the article proclaimed “the Animal Holocaust takes as many lives as did Hitler EVERY HOUR OF EVERY DAY.”

This is not the first time extremist animal rights activists have leaned on the Holocaust as rhetoric for their agenda. The Humane Society of the U.S.’ food policy director, Matt Prescott, previously helped mastermind a widely condemned campaign called “Holocaust On Your Plate.” As the campaign’s title helpfully laid out, it drew a direct line from the Holocaust and the death of millions of innocent civilians, to… having animals on farms.

As for Santucci, her extremism unsurprisingly extends to politics-writ large as well. On her Twitter account, she called on Canada “to gut” the protesters involved in the trucker convoy. 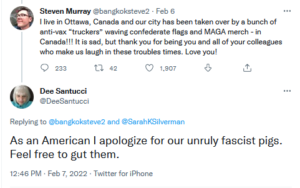 Too often, policy debates are driven by extremists. Instead, these poisonous ideas should be driven out. Here’s a simple rule: If someone makes a frivolous Nazi comparison, that should be the end of listening to them.