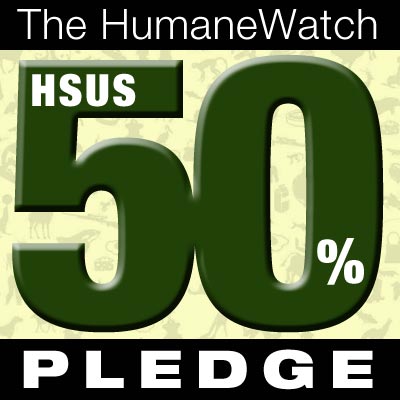 What’s this all about? Let us explain:

HumaneWatch has been watch-dogging the Humane Society of the United States for about 13 weeks now. Here’s just a little bit of what we’ve learned:

Put this all together, and it’s a story of fiscal mismanagement, financial misdirection, and duping the public.

But we believe everyone is redeemable, including HSUS. So here’s the Pledge in a nutshell: As soon as HSUS CEO Wayne Pacelle commits to doing the right thing, we’re outta here.

You read that right. Hear me now, and believe me later, as Hans und Franz used to say. If the CEO of the Humane Society of the United States will make a commitment to start sending just 50 percent of HSUS’s income to hands-on U.S. pet shelters, HumaneWatch will disappear for good.

We’ll pull the plug. Yank the life-line. Cease and desist. Become an ex-blog.

That’s the challenge. That’s our pledge. And it’s non-negotiable.

HumaneWatch and its high-profile advertising are clearly getting under Pacelle’s skin. On May 17 we were in The New York Times and The Wall Street Journal. On May 18 it was Variety, the unofficial bible of Hollywood. And on May 19 there was a full-page HumaneWatch ad in HSUS’s hometown paper, The Washington Post.

All the ads carry the same message: The Humane Society of the United States gives less than 1 percent of Americans’ donations to underfunded pet shelters.

Less than one percent. Egad. That has to be embarrassing. If we have to put ourselves out of a job to turn it around, so be it. America’s pet shelters will reap countless millions of dollars, and our minor ad expenditures will seem like the smartest investment since Microsoft was $1 a share.

Go ahead, Wayne. Make us obsolete. We dare you. Commit to being a real humane society, just half of the time. We’ll fold up our laptops and bid HumaneWatch adieu.