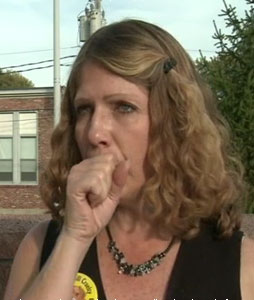 The battle over Missouri's "Proposition B" election fight is heating up, and the Humane Society of the United States doesn't exactly seem up to the task.

About mid-way through the broadcast, Dr. Foster was asked to explain why it's a bad idea for HSUS to put a legal limit on the number of dogs a pet breeder can own. He had a good answer, and then … well — Schmitz tried to push back.

She thought she had Foster in a "gotcha" by accusing his wife of being the part-owner of a very, very large dog-breeding business. The only problem is that Foster isn't married.

Then things really get weird. Listen for yourself. More after the jump.

It's hard to decide what's more embarrassing: Blaming a guy for the business practice of some other guy's wife, insisting (wrongly) that the woman lives in the first guy's hometown (they're 75 miles apart, by the way), or blithely dismissing both huge errors with a dismissive "regardless…"

Yikes. The next time anyone tries to tell you the Humane Society of the United States has all its ducks in a row—even on an issue that they practically own—play this audio for 'em.

The full interview is below, if you're in the mood for hearing a more-humane-than-thou snob get schooled by someone who actually knows which end of a puppy is which.