A few weeks ago when the "Mercy For Animals" animal rights group unveiled its undercover video of an Ohio dairy farm, the news was met with a mixture of anger, anger, and anger.

Animal activists, of course, were angry at Billy Jo Gregg Jr., an Ohioan who worked at the Conklin Dairy Farm for nine months before his arrest for abusing dairy cows. And the public was angry at farm owner Gary Conklin for allowing such a monster to get anywhere near his livestock in the first place.

Many farmers, though, were angry at Mercy for Animals. The group appears to have sat on its video for several weeks, allowing Gregg to come back to work again and again (and again) instead of taking immediate action. Questions have been raised about whether the video in question was staged, orchestrated, creatively spliced, or otherwise phonied up by Mercy for Animals, its president Nathan Runkle, and its hired "investigator" Jason Smith. No one should defend what was depicted in the movie's final cut, but it's fair to ask about how it was put together.

If nothing else, the timing of it all made us wonder: Was the Mercy For Animals video pushed into the spotlight in order to give the Humane Society of the United States some new talking points for its Ohio political signature-gathering campaign? Was HSUS and its "Ohioans for Humane Farms" front group behind the whole thing? Is Mercy For Animals just the larger group's current proxy for this sort of tactic in Ohio?

HSUS's Paul Shapiro says his group was clueless about the Mercy for Animals investigation until just before the video was released. He told Buckeye Ag News the day after the video surfaced that "it’s a coincidence. We didn’t learn about this case until just a few days ago."

Here's why we don't believe him.

First, barring an incredible coincidence, it looks like the Jason Smith hired by Mercy For Animals to do its Ohio videotaping is the same person hired by HSUS to videotape the conditions inside a Vermont slaughter facility last September. 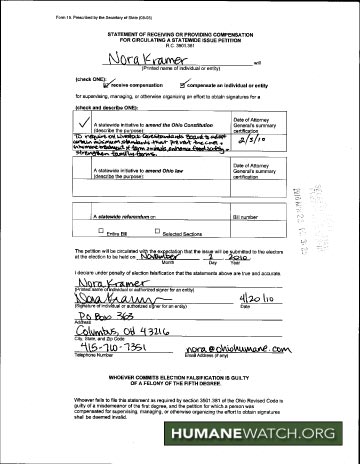 And second, when HSUS began notifying the State of Ohio that it intended to pay signature-gatherers for its ballot campaign, several of the "Form 15" filings authorizing this political gravy train were completed by Mercy For Animals. The group is paying at least three of its employees to gather signatures for HSUS.

One person's "Form 15" is worth special attention. Remember Nora Kramer? She ran HSUS's 2008 signature gathering operation in the San Francisco Bay Area, and moved to Cleveland, Ohio in April to do the same job.

On the day before she announced her transfer, Kramer filed a Form 15 with the Ohio Secretary of State. She gave her e-mail address as "[email protected]ne.com" (check). Her phone number had a San Francisco area code (check). But her mailing address was the Columbus, OH post-office box of Mercy For Animals (uh-oh).

Don't tell us these groups aren't connected, collaborating, and collusive. And don't tell us Jason Smith isn't busy videotaping some pork producer at this very moment.