California Egg Farmers Could Go Bankrupt Thanks to HSUS - HumaneWatch 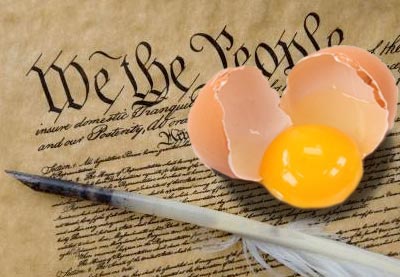 Yesterday, the Humane Society of the United States cracked open the champagne as the U.S. Congress passed a Farm Bill without an amendment by Iowa Rep. Steve King that would have stymied HSUS activism. HSUS could soon be popping another cork as California’s egg farmers go out of business.

In 2008, HSUS duped California voters into passing the Proposition 2 ballot initiative, which demanded massive and costly infrastructure requirements of state egg farmers by 2015—something that University of California experts predicted would bankrupt the state egg industry. Then, in 2010, California passed a state law stating that all eggs sold in the state had to come from producers abiding by Prop 2 standards starting in 2015.

On Monday the Missouri attorney general filed suit against the 2010 law, claiming that it is economic protectionism in violation of the Constitution. This lawsuit (read it all here) was inevitable. And it seems to us laymen that it is likely to prevail.

Historically, states have been allowed to regulate interstate commerce for reasons of public safety—but only if those reasons are legitimate, that is, not illusory. But as Missouri, which is the second-largest egg exporter to California, points out, California’s justification for the law is just that—illusory public safety with economic protectionism at heart.

What’s the evidence for this? Consider the following:

In this light, the defense that California’s law is a public safety measure seems like a total farce.

Bottom line: If the lawsuit succeeds, then California egg farmers will be exactly where they were in 2009 after Prop 2 passed: At a significant economic disadvantage compared to out-of-state egg farmers, and many will likely go bankrupt or move to Nevada.

They can thank HSUS, which along with other animal-liberation activists, funded Prop 2. And it’s not that the vegan HSUS will care: HSUS has the goal of ending animal agriculture.

Meanwhile, the egg industry’s main trade group has partnered with HSUS the past few years to try to push federal legislation to undo HSUS’s damage to California—by hurting egg farmers in the other 49 states with federal mandates. The legislation has gone nowhere, and California farmers have got to be sweating.

Memo to the UEP: When you get into bed with your enemy, bad things happen.