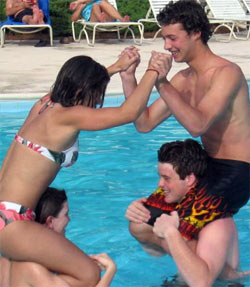 Kids know that a "chicken fight" involves getting on someone's shoulders while he stood in a swimming pool, then wrestling with someone else who is similarly "up high" until one of you fell in the water. (Peter from "Family Guy" has different ideas.)

Apparently there are some people who actually arrange fights between chickens. We don't understand it. We don't condone it. Ick.

HSUS hates these fights so much that its experts rushed to judgment a bit yesterday in Kentucky.

Kentucky police officers should not treat this criminal activity with a wink and a nod, and it's another sign that state lawmakers must act to strengthen the penalties for cockfighting.

Only it turns out the officer was there as part of his job. Here's WAVE-TV3 in Louisville (emphasis added):

An eastern Kentucky sheriff says a deputy shown in a video standing by at a cockfight was there in search of a fugitive.

Johnson told The Times Tribune of Corbin on Wednesday that he had seen the video, which was released Tuesday by the Humane Society of the United States. In the video, a uniformed, unidentified Kentucky State Police trooper and other law enforcement are shown apparently watching the cockfight at an arena in Clay County without intervening.

Cops? Those uniformed people with badges and guns? They're the good guys. You've met enough of them to know that by now.