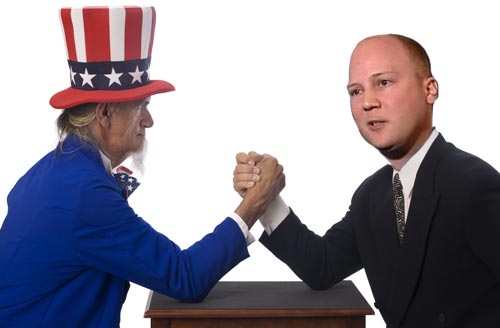 Two Members of the U.S. Congress are hot on HSUS’s trail for what may be excessive lobbying, and the IRS is apparently taking a hard look.

Here’s a little background: In March we spoke with attorney Frank Losey, who is independently leading a campaign to get the IRS to investigate whether HSUS’s wide-ranging lobbying activities violate its 501(c)(3) charity status. As of March, his effort had generated over 4,000 grassroots letters to the IRS, and hundreds of letters to Members of Congress.

And the effort has apparently been yielding some serious fruit.

In a letter from March 23 that's just surfacing this morning, Congressman Blaine Luetkemeyer (R-MO) wrote to IRS Commissioner Douglas Shulman to convey his concerns about HSUS’s lobbying activities. Specifically, Luetkemeyer singles out the apparent conflict of interest in Michael Markarian’s role as head of HSUS’s lobbying arm (the Humane Society Legislative Fund) and his positions as HSUS Vice President and Chief Operating Officer. Luetkemeyer also notes HSUS’s own admission that it “helped to pass…a total of 470 new state laws in the last 7 years.”

Also, on April 28 Congressman Pete Visclosky (RD-IN) forwarded the IRS Commissioner a letter from one of his constituents who raised additional concerns about HSUS’s lobbying activities.

The IRS is, at a minimum, seeking more information. Luetkemeyer sent a second letter on May 12 to IRS Exempt Organizations Director Lois Lerner, thanking her for speaking with him about HSUS the week before. Luetkemeyer also forwarded her additional information provided by his constituents, and concluded (in his own words): "The attached information unquestionably demonstrates that HSUS invests a substantial amount of time and money in political campaigns and attempts to influence specific legislation, a clear and direct violation of section 501(c)(3) of the Internal Revenue Code."

It’s worth noting that Rep. Luetkemeyer is a member of the House Oversight & Government Reform Committee. This body is empowered to issue subpoenas and its role is to tackle government waste, fraud, and abuse. He's probably in a good position to wield some leverage if he really wants to sink his teeth into the issue.

This didn’t happen by itself. It simply takes concerned constituents. Every American has a Member of Congress, and squeaky wheels tend to get all the grease.