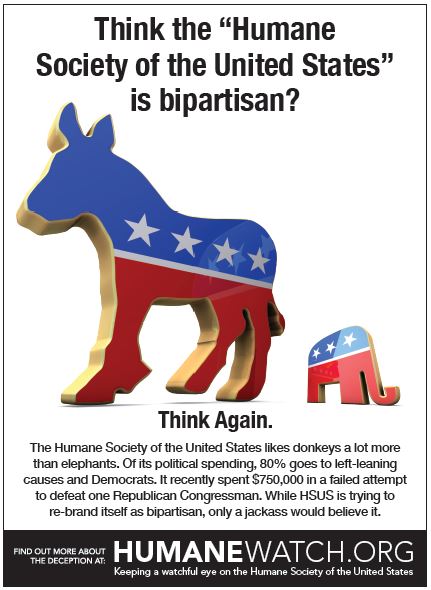 It isn’t enough that the Humane Society of the United States (HSUS) misleads the American public with ads focused on helping pets – only about 1% of its budget goes toward funding local shelters – now it is making overtures to conservatives with similarly distorted rhetoric. Recently, we’ve seen HSUS hire a GOP fundraiser, reach out to conservative think-tanks, and have several employees attend the Conservative Political Action Conference in DC. (HSUS was previously banned from exhibiting there, but apparently individual employees can still register.) And last week, an HSUS staffer who is the son of a syndicated conservative columnist argued that conservatives should support the HSUS agenda out of a “common love of animals.”

That’s like saying everyone in Congress should be able to work together because “they love America.” Loving animals and loving America isn’t in dispute: the means and methods of that protection matter. HSUS’s big-government approach to public policy is anathema to conservative principles, and HSUS actively attempts to undermine conservatives at the ballot box.

According to OpenSecrets for the 2016 cycle, Humane Society Legislative Fund (HSLF), the legislative arm of HSUS, gave $4 to help Democrats for every $1 given to Republicans. Its Super PAC spent two-to-one for Democrats. When you look at the methodology for the HSLF’s scorecard, it’s littered with policies like expanding federal lands, encroachment on a state’s right to manage its wildlife populations, and generally being pro-regulation.

In 2016, HSUS funded a ballot measure in Massachusetts that will ban the sale of most eggs and pork as they’re currently produced. Instead of allowing the free market to work and consumers to have choices about whether to buy cage-free eggs (at a higher cost) or regular eggs, HSUS would prefer to outlaw the sale of common eggs. HSUS has pushed gun and ammunition control. It advocates for legislation to ban the sale of pets at pet stores and legislation to ban circuses from coming to town.

You can’t cozy up to the party of individual liberty and the free market when you’re constantly trying to undermine both.

HSUS is a front group for radical animal-rights activists that are pro-vegan and anti-animal enterprise. Conservatives should be wary of sweet-talk.