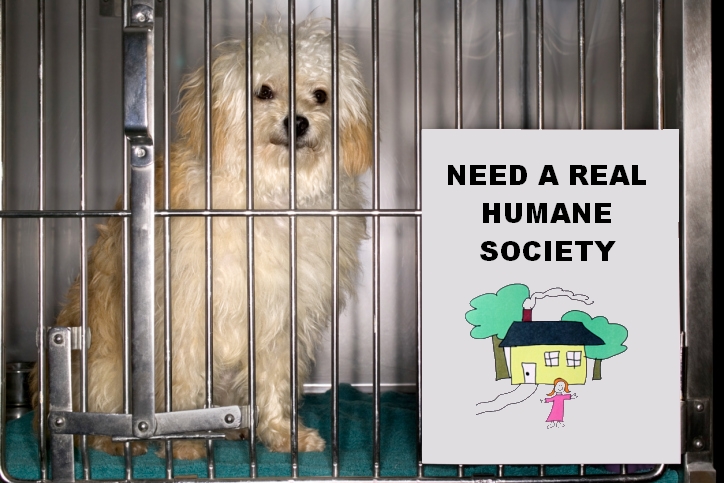 HumaneWatch readers are familiar with the basic facts about the Humane Society of the United States that many Americans don’t (yet) know: HSUS is an animal rights group that shares less than one percent of its budget with hands-on pet shelters and doesn’t run a single pet shelter of its own anywhere.

That last bit may be about to change.

The Idaho Press reports that HSUS wants to take over the Canyon County Animal Shelter in the town of Caldwell:

County commissioners announced last month they intend to cut funds to the Canyon County Animal Shelter from about $900,000 a year to about $300,000 a year because of decreased county revenues. The $300,000 a year would cover utility costs and basic maintenance of the building….

[T]he Canyon County Animal Shelter Blue Ribbon Committee had recommended the county fund the shelter at $500,000 a year with dog licenses and other revenue making up the difference….

The new proposal also takes operation of the shelter out of the hands of the county, establishes an animal shelter board and seeks to find an outside organization to operate the shelter. The Humane Society of the United States has contacted the county about running the shelter, but no agreement has been reached. [Emphasis added.]

If HSUS is truly interested in rolling up its institutional sleeves and operating this animal shelter, and it’s finally willing to spend serious money doing what its donors expect, good for them.

But why start doing the right thing all of a sudden?

It’s possible that this is just a PR move. HSUS is not happy with our efforts to correct potential donors’ misperceptions. If HSUS begins to operate just one pet shelter, we certainly won’t be able to say that the group “doesn’t run” any.

Managing a token pet shelter for PR purposes would be the height of cynicism. But so is calling yourself “the humane society” while siphoning millions of dollars into activities that have nothing to do with rescuing pets.

It’s always a possibility that Canyon County won’t want to work with HSUS. (There are probably far more qualified shelter professionals available locally.) And a “proudly run by HSUS” emblem would come with baggage. We don’t imagine HSUS’s anti-hunting, anti-animal agriculture positions would be well-received in—of all places!— Idaho.

If this is just the tip of the spear, and HSUS is beginning a broader pitch to run many pet shelters, we’re not going to complain. If nothing else, maybe HSUS’s bean-counters will visit a few of those shelters and offer to write some checks. But until HSUS’s motives are clear, we’re reserving judgment.