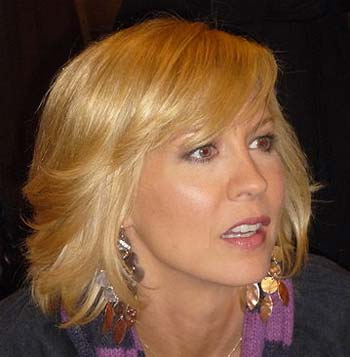 On December 7 of last year, “Dharma and Greg” co-star Jenna Elfman “tweeted” a photo taken after she taped a new "give $19 a month" TV ad for the Humane Society of the United States. Elfman made a radio PSA for HSUS in 2001 and lent an image of her lips to an HSUS-branded postage stamp in 2008, but this was her first on-camera work for the animal rights organization. It reportedly began airing late last week.

Last night the video production company that shot this fundraising ad posted a press release about it, but the release was removed early this morning. (Here’s Google’s cache, and our screen-grab for posterity.) In addition to the Jenna Elfman ad, the release also linked to videos of two more spots that may or may not be running nationally: one narrated by Wayne Pacelle, and another showcasing three children. (Note: We can’t control how long these movie files will be available for viewing.)

The Jenna Elfman fundraising ad is the most interesting of three to us. Not because it’s fronted by an actress, but because we counted 44 live animals in this ad, and all but two are dogs and cats:

More after the jump.

We’ve written before about how HSUS seems to go out of its way to promote the idea that it’s primarily a dog-and-cat-shelter organization, even though it doesn’t run a pet shelter anywhere (and is stingy with its shelter giving).

To be fair, Elfman’s voice-over claims HSUS “helps all animal wherever they’re in need.” But the only non-canines-and-felines we see are a horse and a white baby seal. The ad narrated by Pacelle has 29 animals, all dogs and cats except for the same seal and horse. The “kids” ad shows 55 dogs and cats, one seal, and 5 horses.

The pictures communicate what the words won’t.

That seal, by the way, is a young pup known as a “whitecoat.” It has been illegal to hunt or kill whitecoat seals throughout North America since 1987. So it’s hard to imagine a donation to HSUS can help these marine mammals any further.

And the horses? Just two months ago, HSUS continued using a horse named “Second Chance” in its December 2010 “Animal Survivors” fundraising campaign after the animal had already died. This doesn’t inspire confidence.

Have you noticed that we haven’t mentioned cows, pigs, or chickens yet? That’s because there aren’t any in these commercials. Not a single one. Yet an astonishing amount of HSUS’s money—your money, if you donate—actually goes to campaigns targeting farmers who raise animals for food.

We told you this week about the $1.6 million HSUS poured into Ohio last year to fight egg farmers. And that was just to get a ballot initiative through the signature-gathering stage. Plus HSUS spent $4.12 million on its 2008 California “Prop 2” farm battle.

Is HSUS purposely hiding the ball and diverting millions to a purpose that its ads don’t address? The case is getting stronger by the month. If HSUS intends to keep funding seven-figure attacks on farmers in order to drive up the cost of non-vegan foods, it should just come out and say so.

Here's a transcript of the Jenna Elfman ad:

JENNA ELFMAN: Hi, I'm Jenna Elfman and this is Daisy. We all know there's no better feeling than being loved. But not everyone is lucky enough to be loved.

The fact is, each year, over 3 million innocent animals, like Daisy, are destroyed in shelters across America because they cannot find a loving home to adopt them. That's over 8 thousand animals lost every day—350 lives every hour.

Join the Humane Society for just $19 a month and help end animal suffering and safe lives. For almost 60 years the Humane Society of the United States has been investigating cruelty, campaigning for stronger laws and promoting adoption and better treatment of animals everywhere.

As an active member of the Humane Society, you'll be part of the nation's largest and most effective animal protection organization. But your membership is critical because many more animals urgently need help. You can help save an animal's life.

ANNOUNCER: Join now. As a monthly member with your first $19 monthly payment, you'll get your membership ID, this official Humane Society fleece members jacket, and this eco-friendly tote bag, plus a free subscription to All Animals magazine.

JENNA ELFMAN: Most of all, your membership dues will be working throughout the year to give animals chance at a better life.

ANNOUNCER: Join the Humane Society of the United States now. As a monthly member with your first $19 payment you'll get your membership ID, official fleece members jacket, this eco-friendly tote bag, plus a free subscription to All Animals magazine.