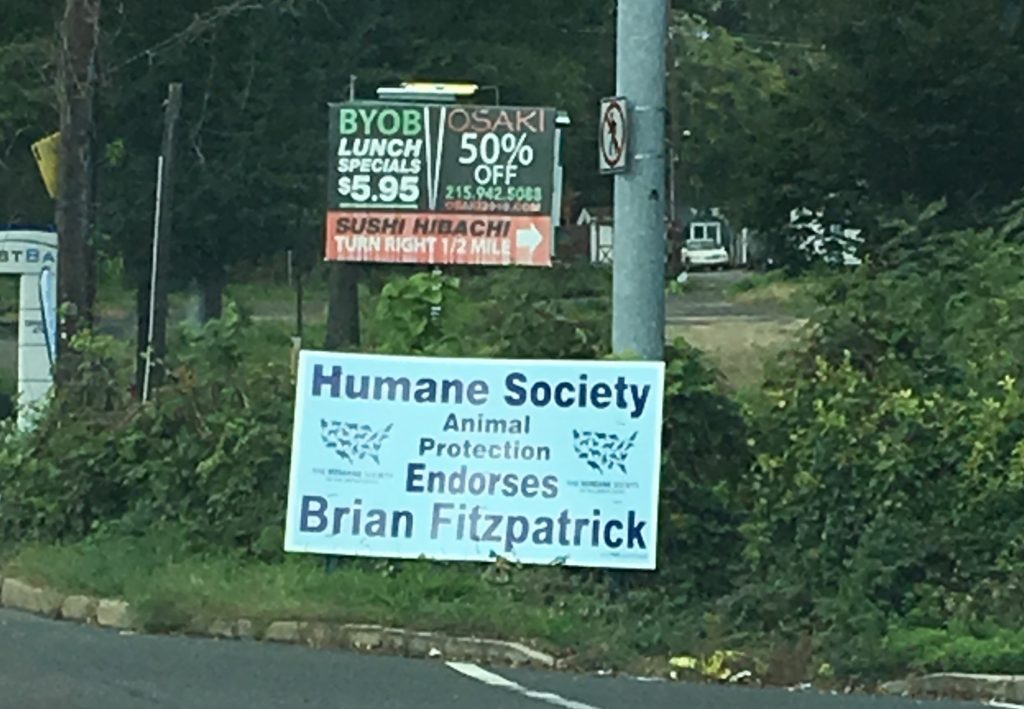 This weekend, a source sent us a photo from Pennsylvania. The picture shows a sign with HSUS’s logo and the words: “Humane Society Animal Protection Endorses Brian Fitzpatrick.” According to our source, there were a number of these signs throughout Bucks County, where Fitzpatrick is running for Congress.

The head honchos at HSUS know this, and have scrambled to issue a typo-riddled statement on the HSUS website this morning saying, in part, “While the Humane Society Legislative Fund, which is a 501(c)(4) organization, did endorse Brian Fitzpatrick, HSUS did not. HSUS does not control or direct any election related [sic] activities of the Humane Society Legislative Fund. We’re a public charity that does not ever endorse candidates for public office. … Any use of the organization’s name or logo in an  election [sic] for public office is made without our authorization.”

The statement leaves many questions. Did an HSUS staffer in the field approve these signs? Did a campaign make them without checking with HSUS? And how can HSUS credibly claim it doesn’t control the election activities of its Legislative Fund, when the Legislative Fund’s board is controlled by HSUS board members?

We can’t expect HSUS to be forthcoming about what happened. This is a group whose board of directors tried to keep an accused sexual predator on as CEO just a few months ago. So we’re forwarding this material to the IRS. They should get to the bottom of it, and revoke HSUS’s charity status if the facts warrant it. Too bad for HSUS that Lois Lerner has left the agency.