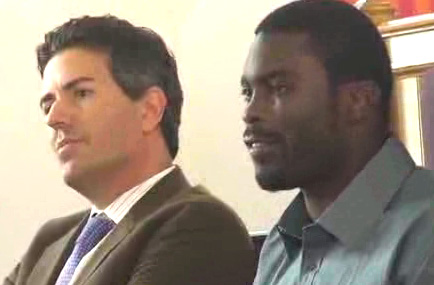 The pet-loving world was shocked last fall when Michael Vick got a dog, just a few years after serving time in federal prison for his role as a dogfighting kingpin. While involved with dogfighting, Vick personally drowned, slammed, and hanged dogs to death, according to a USDA investigation.

Now Vick has acquired a second dog, and it’s a Belgian Malinois, a breed that’s used by the military and police. TMZ reports that “Vick’s new dog is the WORST possible breed for a convicted dog killer … and that’s from the official organization that breeds the dog,” the American Belgian Malinois Club and Rescue. [Update 3/7/13: The ABMC contacted us and directed us to a statement disputing the TMZ report, which reads in part, “This article does not reflect the position of the AMBC. We are concerned about the image this article might portray to the public about our breed and our club.”]

Fair question: Would any of this be happening if Wayne Pacelle, president of the Humane Society of the United States, had not endorsed Vick?

Following Vick’s release from prison, Pacelle partnered with Vick, allowing the convicted felon to become an HSUS ambassador and go on a speaking tour, which helped rehabilitate Vick’s public image. It surely didn’t hurt that Pacelle’s group received a $50,000 “grant” from Vick’s employer, the Philadelphia Eagles. The outcome for animals is a bit more questionable.

Then, Pacelle took it a step farther in December 2010, telling the Atlanta Journal-Constitution that Vick “would do a good job as a pet owner.”

That was a shocking statement to make. A lot of people disagreed with that statement then and continue to do so. Vick getting a dog last fall ripped a scab off a wound, and his getting a second dog will be a slap in the face to many. But Vick has P.R. “cover” provided by Wayne Pacelle and the Humane Society of the United States.

Belgian Malinois, the breed of Vick’s new dog, are medium-sized but can be trained to pack a punch. A Malinois reportedly accompanied the SEAL team on its mission to take out Osama bin Laden. Here’s one training video:

Obviously, the dogs have to be taught to do this. But given Vick’s résumé, it shouldn’t surprise anyone if dog lovers are a bit apprehensive about Vick’s new pup.

Maybe Vick’s next acquisition will be a pit bull or a Rottweiler. But hey, HSUS president Wayne Pacelle has assured us that Vick “would do a good job as a pet owner.” So we should all just stop worrying and be quiet, right?