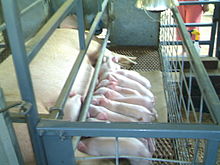 The Animal Legal Defense Fund (ADLF), based in California, is essentially a group of lawyers who subscribe to the HSUS/PETA animal liberation worldview and are willing to clog up the court system with silly lawsuits to push this agenda. The group’s latest ploy is attacking the California state fair for its use of pig housing that protects piglets.

The housing, called “farrowing crates,” is a stall that the sow is placed in just before and for a few weeks after giving birth. They include a way for the sow to lie down so that the piglets can nurse. But they also protect the piglets by preventing the sow from rolling over on them and crushing them. Without farrowing stalls, it’s likely that piglet mortality will increase.

“Freedom for sows comes at the cost of death for many piglets,” writes one U.K. farmer. ALDF founder Joyce Tischler said to The New York Times that her commitment “is that I don’t eat my clients.” But in its latest lawsuit, ALDF’s “clients” may face a more gruesome fate, it seems.

How does this tie into the Humane Society of the United States? We’ve written before about HSUS’s attempts to attack individual maternity pens, which sows are placed in during pregnancy, again for their protection and care. (Two major veterinary groups find that these maternity pens provide for animal welfare.) Attacking farrowing crates is the next logical extension of HSUS’s activism. HSUS can’t take “yes” for an answer because it is opposed to all animal agriculture. So if farmers agree to stop using maternity pens—which would create significant costs for farmers—then HSUS can start a new campaign against farrowing stalls.

ALDF’s director of litigation, Carter Dillard, used to be the director of HSUS’s farm-animal litigation. (We’ve written about his strange vision for humanity before.) ALDF and HSUS have worked together on litigation and legislation.

The bigger picture is also interesting. ALDF takes an incremental approach to undermining the legal system as we know it. No longer would animals be—legally—property, which would open the door to animal lawyers suing just about everybody who uses animals, whether a farmer or a zookeeper. “Would even bacteria have rights? There would be nothing left of human society if we treated animals not as property but as independent holders of rights,” says law professor Richard Epstein.

This certainly seems to be a goal widely shared across the animal liberation movement. PETA sued SeaWorld for “enslaving” killer whales. HSUS has printed fundraising literature dreaming of legal “rights” for animals. The Nonhuman Rights Project, managed by a former HSUS employee, is reportedly planning on a lawsuit later this year with a yet-unknown chimpanzee “plaintiff.”

Animal rights activists have argued in court that they’d rather see elephants dead than in a zoo. With this latest lawsuit, it seems they’re saying they’d rather see piglets gruesomely crushed than end up humanely slaughtered for food.