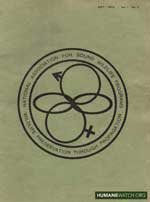 This document is a three-page excerpt (with front matter) from the October-November 1977 newsletter of the National Association for Sound Wildlife Practices (NASWP). The organization, which no longer exists, reported in this issue on a 1974 Washington, DC meeting of 14 wildlife-oriented groups:

In June of 1974 the Wild Canid Survival and Research Center hosted the Symposium on Endangered and Threatened Species in Washington, D.C. During the symposium a group of 14 organizations formed the “Continental Coalition” and developed 26 principles that reflect the viewpoint of this group.

Later that year, the group of 14 (now renamed the “Wildlife and Habitat Coordinating Committee,” issued a press release formally endorsing those 26 principles. The Humane Society of the United States was one of these organizations, as was the Fund for Animals (which would later merge with HSUS), and the HSUS-affiliated International Fund for Animal Welfare.

The principles endorsed by these groups included: