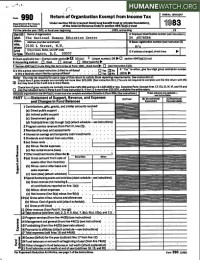 This is the Form 990 tax return that the National Humane Education Center filed with the IRS for fiscal year 1984.

NHEC was active in the 1970s, but became a defunct corporation. However, it was still used to pay then HSUS CEO John Hoyt and then Treasurer (and future President) Paul Irwin in the 1980s as part of what later became a stinging scandal.