1990 Draft of a California AG Civil Complaint against HSUS - HumaneWatch 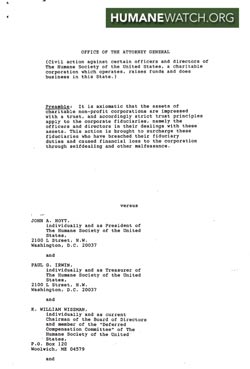 In late 1990, attorneys retained by a group of Humane Society of the United States board members drafted this 12-page civil complaint against HSUS itself.

The complaint was presented to the California Attorney General as one possible legal avenue through which HSUS could recoup financial losses incurred by its chief executives’ “breach of fiduciary duty, conflict of interest, self dealing, private inurement, unjust enrichment, misappropriation of charitable assets, and fraud.”

It asked for $750,000 to be reimbursed to HSUS by several individual defendants:

The complaint was not acted on. It was shared with HumaneWatch by a former HSUS board member.