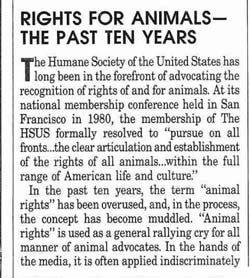 This document, a legal-size mailer from the Humane Society of the United States, is titled “A Discussion … Rights For Animals.” It was produced and printed in 1990. A fundraising-disclosure disclaimer that only applies to West Virginia donors may suggest that this version was only sent out to HSUS’s mailing list in that state.

This piece begins with a revelation that may startle 21st-Century readers who are accustomed to seeing HSUS distance itself from the divisive language of “animal rights”:

The Humane Society of the United States has long been in the forefront of advocating the recognition of rights of and for animals. At its national membership conference held in San Francisco in 1980, the membership of The HSUS formally resolved to “pursue on all fronts … the clear articulation and establishment of the rights of all animals … within the full range of American life and culture.”

The two-page treatise, unusual for a fundraising mailer in its philosophical long-windedness, mainly argues that “animal rights” means including animals “within the same system of moral protections that govern our behavior toward each other.”

In particular, the fundraising mailer emphasizes the need for animals to have legal standing in courts of law:

[Animals] are viewed as having no inherent capacity to invoke the protection of the state, and their entire legal status is underpinned by constitutional doctrines that deny them recognition as “persons.”

Access to the courts is such a powerful right and would pose so revolutionary a threat to the established order that it will probably be among the last of animal rights to be recognized, requiring statutory, even constitutional, changes.

Predictably, the leaflet ends with a request for money, promising that “Money donated is put into action on the front line right away. The animals need us now.”

This document is reproduced through the courtesy of the University of Illinois Archives (Harold D. Guither Papers, 1977-2001)