1990 HSUS Report of the President - HumaneWatch 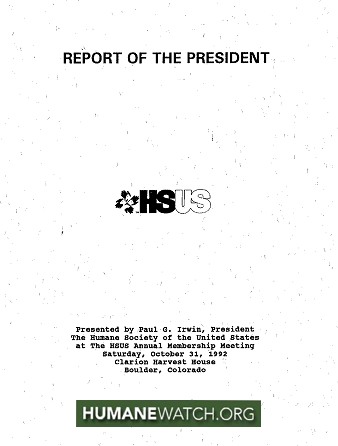 This is the 1991 HSUS Report of the President, presented by John Hoyt at the Annual Membership Meeting in Washington, DC. Hoyt claims that HSUS is separate from the animal rights movement that developed in the 1980s, writing: “the lines between animal protection groups such as The HSUS and animal rights groups such as PETA are being more clearly drawn and less frequently cross.” Hoyt, however, later states that “[t]his is not to say that the rights of animals should be either ignored or minimized as a meaningful and vital philosophy. Indeed, it must not be.”

Hoyt also states that he wishes HSUS to formally promote the message of eating less meat. He quotes from his April 1990 Earth Day speech, in which he said “Planet Earth is dying, and it is we, the people, who are hastening her demise.”

The Report also includes passages from:

This document is courtesy of the University of Illinois Archives/Harold D. Guither papers.