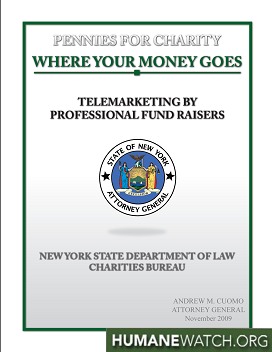 This is the “Pennies For Charity Report from the Charities Bureau of the New York state Attorney General’s office. It consists of statistics covering telemarketing campaigns conducted on behalf of charitable organizations in New York during 2003.

According to this report, a professional telemarketing company called The Share Group raised $1,031,103 during 2003 on behalf of the Humane Society of the United States. Not only did HSUS itself not see a single cent of this money, but the organization paid Share Group $173,726 for the fundraising work (a “net” yield of negative 16.85 percent).