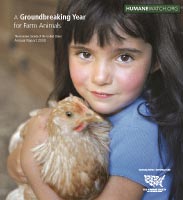 This is the annual report that HSUS published to describe its program priorities in 2008. It contains a message from president Wayne Pacelle to supporters, testimonials from a selection of HSUS employees, and a summary of its program accomplishments and consolidated financial data.

Highlights included details of the HSUS-backed Proposition 2 to force Californian egg farmers to redesign their facilities or close their doors, acquiring undercover video from a cattle ranch, a state law enacted in Massachusetts to ban greyhound racing, distribution of HSUS’s KIND News publication to nearly 1 million elementary schoolchildren, and $3.5 million spent on an animal-care initiative in the Gulf Coast inspired by Hurricane Katrina (despite raising $34 million for rescue activities in 2005).

On page 16, HSUS claims to have “cared for” more than 70,000 animals during 2008. But nearly 33,000 of these were dogs and cats that were spayed or neutered in conjunction with HSUS’s “Spay Day,” a promotion that saw HSUS supporting pet shelters in nominal amounts to do the surgeries. (Neither HSUS nor any of its affiliates ever actually “cared for” these pets.)