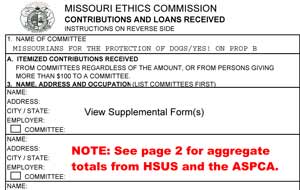 This document is a December 2, 2010 campaign contributions report from the “Misourians for the Protection of Dogs” ballot committee, as filed with the Missouri Ethics Commission.

Since it was submitted nearly a month after the 2010 election (in which the committee’s “Proposition B” was approved by a 3-percent margin), this report is likely the final assessment of donation levels for many contributors. Amounts listed next to each donor are “aggregate” amounts.

While this report is not exhaustive, it does show contribution totals for five notable animal organizaitons: