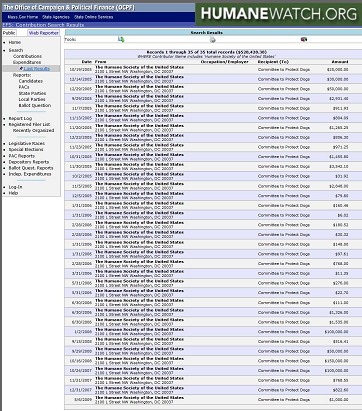 This is a report generated on March 6, 2010 by the website of the Massachusetts Office of Campaign & Political Finance.

It shows a total of $528,428.38 in contributions from the Humane Society of the United States to a ballot campaign group called the “Committee to Protect Dogs,” between 2005 and 2009.

The Committee to Protect Dogs successfully waged a 2008 ballot campaign to ban greyhound racing in Massachusetts.