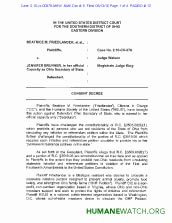 In Friedlander v. Brunner, the Humane Society of the United States sought to invalidate an Ohio law holding that only residents of the state can gather signatures to put a legislative initiative on the ballot. The suit was filed in the U.S. District Court for the Southern District of Ohio.

The judge’s decree still requires signature gatherers to truthfully disclose their permanent address; but it also restrains the Ohio Secretary of State from invalidating signatures that were gathered by non-Ohio residents.

The “Ohio Humane” campaign’s public statements about its signature-gathering totals indicate that as a result of this ruling, HSUS began employing paid signature-gatherers almost immediately.