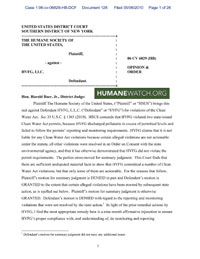 This decision was issued by U.S. District Court Judge Harold Baer, Jr., on May 6, 2010. It’s an order granting Summary Judgment to the Humane Society of the United States in a lawsuit the group filed against Hudson Valley Foie Gras, a duck farm in upstate New York. As part of its long crusade to force foie gras (duck liver) out of the reach of Americans, HSUS had alleged in 2009 that the farm was violating its pollution permits under the federal Clean Water Act (CWA).

While HSUS asked the judge to impose somewhere from “$550,000 to over $600 million in civil penalties,” the ruling awarded no money at all. And despite a boastful press push by HSUS after the ruling was issued, the only penalty handed down was a nine-month probationary period during which the farm will be subject to outside environmental audits. The judge also told the farm to spend $50,000 on “an environmental project to remediate its CWA violations.”

In 2006, HSUS unsuccessfully sued the state of New York (HSUS v. Empire State Development Corporation) in an attempt to stop this same farm from receiving a $420,000 grant to improve its manure treatment and other pollution-related operations. In effect, HSUS sued the state to prevent the farm from improving its environmental practices, and then (after that suit was dismissed) HSUS sued the farm for not being “green” enough.