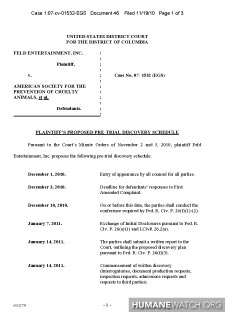 This document is from the federal court records of Feld entertainment v. ASPCA et al. Filed on November 19, 2010, it contains the plaintiff’s proposal for a 27-month schedule encompassing discovery, depositions, and other matters related to Feld’s RICO lawsuit against several animal-rights activists and groups, and their lawyers.

The defendants include the Humane Society of the United States, the HSUS-controlled Fund For Animals, and two attorneys employed by HSUS.

Feld, the parent company of the Ringling Brothers “Greatest Show On Earth” circus, has proposed a schedule through March 1, 2013. HSUS and its co-defendants, on the other hand, asked a federal judge to put everything on hold until its motion to dismiss the whole case has been heard.