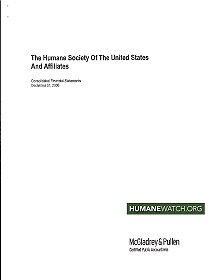 This document contains a Consolidated Financial Report for the Humane Society of the United States, dated on December 31, 2009.

It was prepared by the public accounting firm of McGladrey & Pullen. HSUS filed it with the West Virginia Secretary of State’s office, as part of the process of renewing a fundraising license for the Humane Society Wildlife Land Trust. It’s now a part of the public record.

The Report discloses that the HSUS family of organizations had a combined net worth of $191.3 million as of 12/31/2009, including $148 million in investments ($66 million of which are in hedge funds). Its land and buildings are worth $17.4 million. It spent $34.2 million on salaries and employee benefits. Its pension funds are valued at $18.5 million (which is still $8.8 million less than the $27.3 million in obligations it owes its employees who will retire in the future..

HSUS’s auditors report that the organization and its affiliates collectively spent $25.3 million on fundraising expenses (just 18.8% of their $134 million in total expenses). But Animal People News, the internal watchdog newspaper of the animal rights movement, has performed its own analysis that concluded HSUS spends fully 50% of every dollar on fundraising expenses.