HSUS Lawsuit Against Petland: Dismissed in its Entirety (the first time) - HumaneWatch 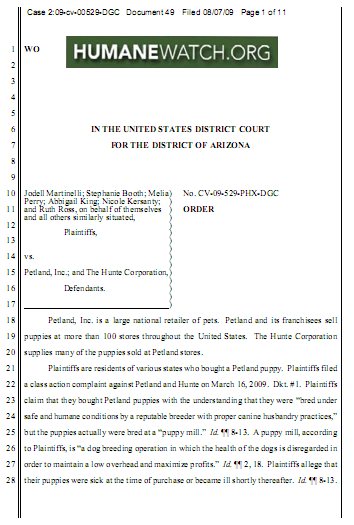 In March 2009, a group of plaintiffs organized by the Humane Society of the United States filed a class-action lawsuit against the Petland pet-store chain and one of its pet suppliers (The Hunte corporation), alleging that Petland had orchestrated a scheme to defraud its customers by selling sick puppies that were raised in “puppy mills” and other environments where veterinary illnesses are pervasive.

Part of the complaint, which was drafted by HSUS lawyers, alleged violations of the RICO statute (racketeering).

In August of that same year, a federal judge in Arizona dismissed the entire lawsuit, but allowed the plaintiffs an opportunity to re-file the case. This document is the order granting the defendants’ motion for dismissal.

The case was later re-filed and most of its claims were dismissed a second time.