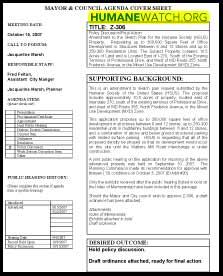 This file is a combination of two similar documents dated October 3 and October 15, 2007, which were obtained from the city of Gaithersburg, Maryland.
(Two documents were merged and identical pages were deleted in the interest of clarity.)

The material itself shows that the Humane Society of the United States owns 10.5 acres of prime real estate along Interstate 270 in Gaithersburg, on which it also owns a two-story commercial building with 67,800 square feet of office space. The building originally belonged to the Tektronix company. At some point in its life, the building’s estimated usable space was downgraded to 62,000 square feet.

In 2007, HSUS began to petition the City of Gaithersburg for permission to improve this real estate parcel. HSUS’s proposed development would include:

HSUS’s development plan calls for a groundbreaking after the completion of a new freeway interchange near the site, which is not likely to commence until at least the year 2012.