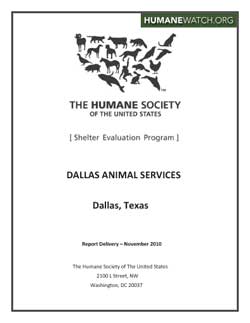 This PDF contains a 122-page report from the “Shelter Evaluation Services” department of the Humane Society of the United States. It was delivered to the city of Dallas, Texas during November 2010. The exact date is unknown, but The Dallas Morning News leaked a copy online on November 29.

The report itself was commissioned in December 2009 by Dallas Animal Services, which agreed to pay HSUS $25,000 for the evaluation. HSUS staff spent three days on-site in April 2010, basing their report on their observations in this very short period of time. HSUS reportedly prepared a similarly expensive report for the same organization in 2001.

The actual funds for the report’s completion were provided by an organization called the Metroplex Animal Coalition (MAC), which describes itself as being “focused on spay and neuter assistance ONLY” (as opposed to live-animal adoptions). However, since MAC’s money comes from dues paid by member groups, and most of its members are themselves animal shelters, it stands to reason that the HSUS report was funded (however indirectly) by private shelters that HSUS should be financially supporting—not the other way around. MAC’s Advisory Board includes one member (out of five) who works for HSUS. Its Secretary/Treasurer chaired a 2010 Dallas fundraising gala for HSUS.

The report itself criticizes Dallas Animal Services for the way it cares for cats; the lack of stimulation and exercise its dogs receive; flawed communication with veterinarians; a lack of hygienic animal handling; a failure to provide significant space to care for horses and other livestock; and a feeling of “alienation” among its staff. HSUS also complained about how the Dallas City Council, whose interests lie in getting animals off the streets, crosses swords with the animal shelter management’s goal of reducing the number of animals that are euthanized every year.

Contained on the report’s last page, as a way to establish HSUS’s bona fides, is the false claim that HSUS is “backed by 11 million Americans, or one in every 28.”

The super-rich HSUS has yet to explain publicly why it shouldn’t be providing evaluation reports like this one for free.