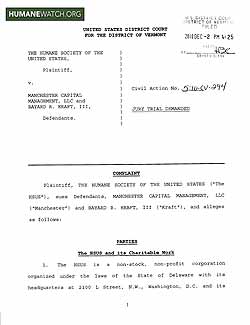 This document is a federal fraud lawsuit filed on December 2, 2010 by the Humane Society of the United States. HSUS sued the Vermont-based Manchester Asset Management and its principal officer, Bayard R. Kraft III.

According to HSUS’s lawsuit, in late 2008 Manchester sold it a $15 million stake in a Cayman Islands-based vehicle called the “Equinox Alternative Offshore Fund L.P.” HSUS claims it made its investment in two stages, giving Manchester $10 million in October 2008, and then adding an additional $5 million a month later at Manchester’s suggestion.

HSUS’s lawsuit contends that while it intended to make its final $5 million investment effective on November 1, Manchester instead “backdated” that investment to October 1—costing HSUS an additional $240,000 in “retroactive” losses.

The lawsuit doesn’t address any reasons why HSUS would knowingly invest the second $5 million—regardless of which month it was to be made official—in a fund where it had already lost $480,000 of its contributors’ money.

Nor does it indicate why HSUS had $15 million in cash available for investment in the Caymans, when its own Bylaws require that:

The lawsuit does, however, suggest that HSUS may have other capital investments with Manchester in addition to the Equinox fund: