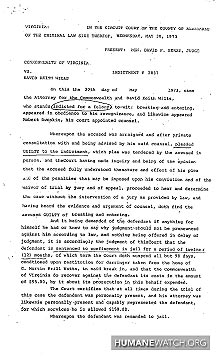 This file contains a copy of David Wills’s 1973 Virginia criminal indictment for breaking and entering.

Wills would later become the HSUS Vice President in charge of international operations and cruelty investigations.

In an appearance in the Circuit Court of the County of Albemarle in the Commonwealth of Virginia, Wills pled guilty to the charge of breaking and entering. The court sentenced him to 12 months in jail, of which all but 90 days were suspended. Wills also agreed to return the property he stole from a private home, and to pay court costs.