Letter from the California Attorney General to HSUS, Dec. 6, 1990 - HumaneWatch 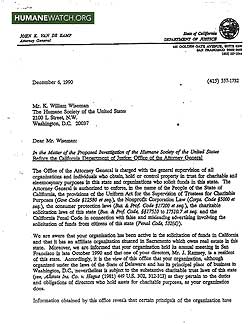 In it, the California AG’s office gives HSUS two weeks to turn over a wide variety of documents—including Board minutes and recordings of meetings, and copies of financial records—related to the financial scandal that enveloped HSUS’s president and treasurer from 1985 to 1989.

The letter reads, in part:

Information obtained by this office reveals that certain principals of the organization have engaged in a course of conduct that, in our opinion, is a violation of fiduciary duties owed to the charitable beneficiaries of the Humane Society of the United States (HSUS), among them citizens of this state.

Information in our possession indicates the following:

It’s unclear how (or if) HSUS responded to this inquiry.