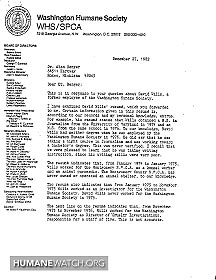 I have examined David Wills’ resume, which you forwarded to me. Certain information given in this resume is, according to our records and my personal knowledge, untrue.

Goldenberg specifically took issue with Wills’ claims of having a B.S. in Journalism and an M.S. from the University of Maryland; of having worked for the Washington Humane Society in 1975; and of having worked as a kennel worker at the Montgomery County (MD) SPCA.