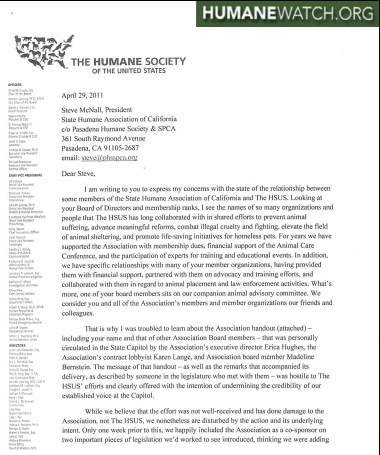 This is a copy of an April 29, 2011 letter that Wayne Pacelle sent to Steve McNall, board member of the State Humane Association of California (and president of the Pasadena Humane Society and SPCA).

Pacelle complains about handouts that SHAC board member Madeline Bernstein and SHAC executive director Erica Hughes circulated recently in the California statehouse that stated, in part:

How is SHAC different from HSUS and the ASPCA?…

ASPCA and HSUS are not umbrella, parent or sister organizations to local humane societies and SPCAs, contrary to the conclusion many reach based on the inclusion of “United States” in HSUS’s name and “American” in ASPCA’s name.

While ASPCA and HSUS may give individual shelters funding from time to time for particular projects, ASPCA and HSUS do not regularly fund California’s shelters and are not involved in their management or operations.

(Note: The State Humane Association of California is not the same as the “SHAC” group whose leaders were convicted in 2006 on federal terrorism charges.)