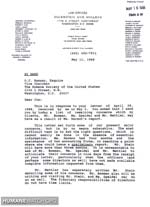 This file contains a 1988 letter from attorney Bardyl R. Tirana to O.J. (“Joe”) Ramsey, then the Vice Chairman of the Humane Society of the United States’s Board of Directors. Tirana was a former Washington, DC School Board member, and a campaign aide to Jimmy carter who supervised the activities surrounding Carter’s 1976 Inauguration. He later served the Carter Administration as director of the Defense Civil Preparedness Agency. (President Carter later merged that agency into FEMA in 1977.)

Three HSUS Board Members retained Tirana in 1988 that year to represent HSUS’s interests, after details emerged of shady financial dealings between a “Deferred Compensation Committee” (a subset of the Board that was never legally empowered in the first place) and HSUS’s top two executives (Paul Irwin and John Hoyt).

This letter concerns, among other things, Tirana’s legal fees—which HSUS’s Board was obligated to pay. (HSUS’s by-laws permitted Board members to be reimbursed “for necessary expenses incurred in fulfilling their duties.”)

It became “necessary” for an outside lawyer to investigate HSUS’s Board after the three dissenting Board members questioned the decision of HSUS’s Board to buy then-HSUS-president John Hoyt’s house from him in 1987 and lease it back to him rent-free.

They also questioned a land deal that benefited HSUS Treasurer Paul Irwin (who would later succeed Hoyt as HSUS President). Irwin had invested in a vacation home property in Brightwater, Maine. HSUS later reimbursed him for the property with $85,000 in HSUS funds. John Hoyt signed the checks.

These and several other instances of Board mismanagement were detailed in a lengthy independent investigatory report submitted to the Board’s Audit Committee in April 1988 by Washington, DC attorney Gail Harmon. Tirana’s letter makes it clear that HSUS’s top leaders sought to bury that report, and to replace it with a less critical investigation conducted by Washington attorney Jacob Stein—who was also the personal attorney of HSUS Board Chairman Bill Wiseman.