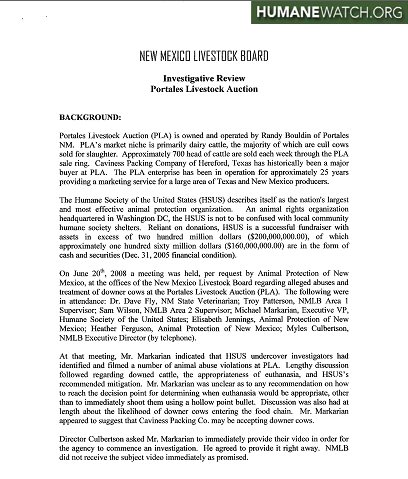 The New Mexico Livestock Board (NMLB) reviewed allegations leveled by HSUS against the Portales Livestock Auction in a video made by undercover HSUS investigators and released to the media on June 25, 2008. The review is signed by NMLB Executive Director Myles Culbertson and dated August 8, 2008. In part, it concludes:

The video presented to this agency is a record of harsh circumstances that can conveniently fit in the context of a speech about malicious animal cruelty. In this particular case the viewers were told in advance by “the nation’s largest and most effective animal protection organization” what they would see; and afterward, told what they had just seen, embellished by suggestions of children subjected to unsafe food. When that same video is broken into its component parts and dispassionately analyzed, it yields findings of a very different nature; nevertheless, they are findings that require the attention of the livestock industry.

[P]erceptions created by the HSUS media releases and press conferences of malice, extreme cruelty, or illegal marketing of downer cows are not found to match the reality of the subject video.