"Protecting All Animals: A Fifty-Year History of The Humane Society of the United States," pp. 6-7 - HumaneWatch 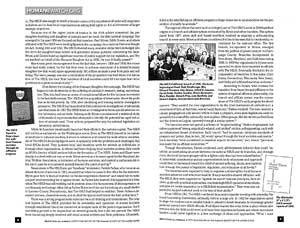 This is a two-page selection (pp. 6-7) from Protecting All Animals: A Fifty-Year History of The Humane Society of the United States, the 2004 book by HSUS historian Bernard Unti.

In this excerpt, Unti examines the earliest history of HSUS's programs. In particular, he describes a system of regional and local branches through which HSUS directly participated in the funding and operation of pet shelters:

The original bylaws of The HSUS provided for its ownership and operation of shelter facilities through established branches conceived as integral units of the parent organization. Such ownership proved to be impractical on several grounds, but it did not prevent The HSUS from becoming deeply involved with local animal shelters and their problems. Ultimately, it did so by establishing an affiliates program to forge closer ties to local societies for the prevention of cruelty to animals.

In the paragraph preceding these two pages, Unti also lists HSUS's "principal activities" during the 1950s—including "support for local [humane] societies and individuals trying to form them," through which HSUS was "determined to raise the quality and extent of humane work at the local level."