Racketeering Lawsuit Filed against HSUS and its Lawyers by Feld Entertainment, 16 February 2010 - HumaneWatch 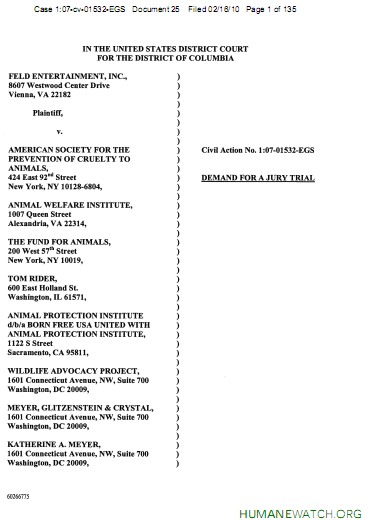 This document is a federal lawsuit filed on February 16, 2010 by Feld Entertainment (the parent company of the Ringling Brothers and Barnum & Bailey Circus) under the Racketeer Influenced and Corrupt Organizations (RICO) Act.

The central claim of the lawsuit (see page 13 of the PDF) is:

[D]efendants have perpetrated and continue to perpetrate multiple schemes to permanently ban Asian elephants in circuses, to defraud FEI of money and property and/or to unjustly enrich themselves, with the ultimate objective of banning Asian elephants in all forms of entertainment and captivity. To carry out these schemes, defendants conspired to conduct and conducted the Enterprise through a pattern of, among other things, bribery and illegal gratuity payments (in violation of both state and federal law), obstruction of justice, mail fraud, wire fraud and money laundering. (emphasis addad)