On November 12, 2009, HSUS and HSMO raided Malott’s property and seized all 25 of her trail horses. She was ultimately charged with 25 felony counts of animal cruelty. What followed was a Keystone Kops-like series of denials, backtracks, and legal body blows which left the impression that the entire search and seizure was unlawful. At one point HSUS was ordered to return the horses to Malott because many of them were starving while in the group’s legal custody. 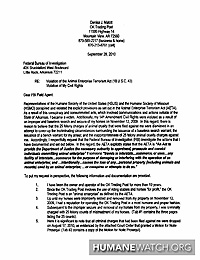 This letter specifically asks for a federal government investigation on the grounds that HSUS and HSMO allegedly violated the Animal Enterprise Terrorism Act (AETA). This 2006 law provides for harsh penalties against anyone who crosses state lines to intentionally damage a business that uses animals in the furtherance of its main purpose.

In the truest sense of the word, I have been “terrorized” by the vigilante-like actions of the representatives of the Humane Society of the United States and the Humane Society of Missouri, and if truth be known, one or more of them may very well have improperly misled the Sheriff into becoming an unwitting accomplice in the violation of the AETA as well as my Civil Rights.