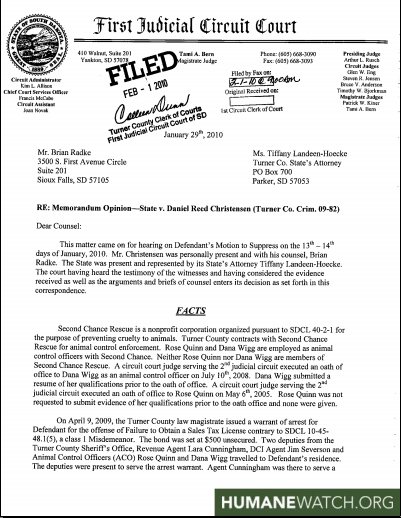 This is a ruling by South Dakota Magistrate Court Judge Tami Bern. It concerned a motion to suppress a search warrant executed (in part) by the Humane Society of the United States, in a September 2009 raid on a hunting dog breeder. The judge noted that “the warrants were largely executed by agents from the Humane Society of the United States” with the assistance of two animal control officers.

Judge Bern ruled that the warrant was wrongfully obtained, and found that an animal control officer requesting the warrant “intentionally misled the issuing court by omitting material information in her affidavits and supplemental testimony.”

The animal control officer had not told the court that she had already requested a warrant days earlier, resulting in the discovery of dogs on the property that were in good health.